May 31, 2018
Amazon’s Initiatives Will Help it Catch Up to Walmart
By Chris Campbell 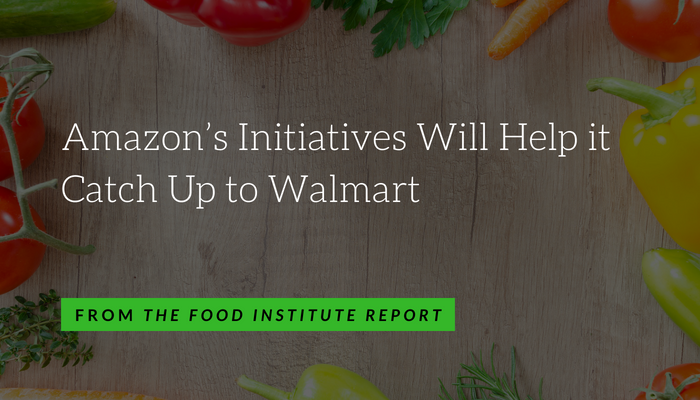 Amazon is on track to match Walmart’s U.S. sales by 2020 or 2021, according to J.P. Morgan analysis, reported CNBC (May 15). The company is said to be growing at a faster pace in the U.S. due to factors such as Prime, its third-party seller expansion and outsized growth in large, underpenetrated categories.

Prime currently has more than 100 million members, and J.P. Morgan expects this number to hit roughly 140 million in 2019. The analysis noted the “massive scale” that Prime delivers, and that Prime’s model would be difficult for other companies to replicate.

In addition, Amazon is still accruing market share. J.P. Morgan predicts the company will jump to 50% of e-commerce sales from 41% of sales over the next few years.

As part of its collaboration with Whole Foods Market, Amazon will offer Prime members an additional 10% off sales items at Whole Foods stores in Florida. The company plans to expand the program to all Whole Foods Market and 365 locations nationwide over the summer.

Along with brick-and-mortar locations for Whole Foods, the company expects to open Amazon Go locations in Chicago and San Francisco, reported The Seattle Times (May 14). Amazon confirmed plans to expand into those cities after notices were posted on its website seeking store managers, but did not specify when the stores would open.

Amazon Fresh is taking steps to transition to a more retail-based model as well, by no longer letting local third-party vendors sell on its platform, according to a person familiar with the matter, reported Business Insider (May 14).