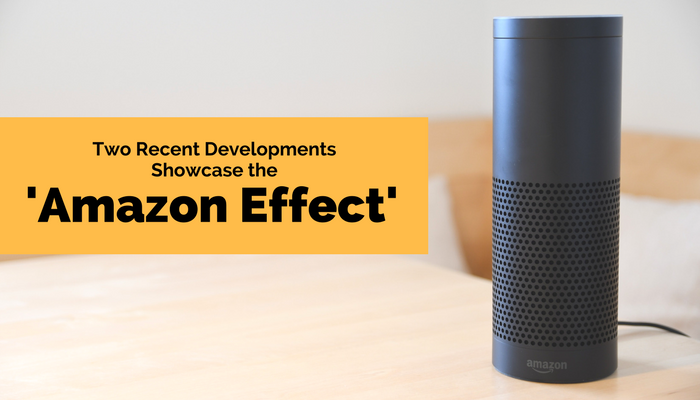 If you are focused on the food industry specifically, or the retail industry more generally, you are likely familiar with the "Amazon Effect." The term refers to Amazon's ability to radically change industries it doesn't operate in, even when it is merely rumors fueling the news narrative.

Case in point: at the end of 2017, Amazon was said to be exploring an entrance into the pharmacy space. Reports indicated that the company acquired pharmacy wholesale licenses in 12 states, and it was unclear whether the company would enter the retail pharmacy business or the pharmaceutical distribution business. Ultimately, the company didn't enter either, but stock prices for both Walgreens and CVS Pharmacy dropped nearly 10% in the aftermath, reported The Street (Oct. 15, 2017). The company did, however, partner with Berkshire Hathaway and JPMorgan to form a non-profit company with the aim of lowering healthcare costs for their hundreds of thousands of U.S. employees. In the aftermath, stock prices for healthcare providers and pharmacy operators fell steeply, reported Forbes (Jan. 30).

With this particular example in mind, I'd like to discuss two recent Amazon developments. First, the company unveiled plans to build a domestic robot, according to people familiar with the matter. Amazon hopes to begin testing the Vesta robot in employees' homes by the end of 2018, and potentially with consumers as early as 2019. The robot may act as a mobile Alexa, going with customers to parts of their home where they don't have Echo devices. Prototypes of the robots have advanced cameras and computer vision software and can navigate through homes like a self-driving car, reported Fortune (April 23).

Amazon has been blurring the lines between brick-and-mortar and online shopping for years now. The introduction and expansion of the Amazon Dash button program and Alexa-enabled voice ordering place physical items within a consumer's home that can lead to retail sales. Additionally, its acquisition of Whole Foods Market and expanding delivery system is melding the home and retail spaces. However, will people truly adopt a robot and bring it into their homes? My answer is yes: Alexa is already personified with a voice and personality. Giving Alexa a physical body seems to be the next evolution of these virtual assistants, and perhaps one day they'll even be able to help consumers cook meals.

The Amazon-bot wouldn't be the first foray Amazon took in entering consumers' homes. In fact, the second news items links up with a blog I wrote in autumn 2017 regarding Amazon Key. The program would allow Amazon to deliver items inside a customer's home in 37 cities. Now, Amazon will begin delivery to vehicles in those 37 cities for Prime members who own General Motors or Volvo vehicles, reported The Washington Times (April 24).

Prime members with a 2015 or newer Chevrolet, Buick, GMC or Cadillac vehicls with GM's OnStar connected-car service, and those with a 2015 or newer Volvo vehicle with an active Volvo On Call account will be eligible for the program. Similar to the company's Amazon Key program, deliveries can be made directly to vehicles. Customers must use the Amazon Key app, which they can link to a connected car, allowing instantaneous communication to indicate where a car is parked and when a delivery is made.

At the time, I wrote that customers might be hesitant to allow a stranger into their homes for delivery, despite the convenience. Walmart was also working on an in-home delivery model at the time, and I wrote:

"While the project is certainly headline worthy and innovative, I'm not sure most of the country is ready for this kind of service. Granted, it seems perfect for Silicon Valley and other parts of the country that are more tech-invested, but I am uncertain most of this country is ready for a person they do not know to enter their homes. How many have the required technology to allow for this type of transaction, anyway?"

The opposite appears true for Amazon Key In-Car. The convenience level is extraordinary: a customer can order an item while at work and have that item delivered to their car, eliminating the need to stop at a store on the way home. While this may work for some packaged foods and other homewares, I don't see how this is practical for fresh food deliveries. Unless someone has a prepared cooler in their trunk, I'm not sure anyone is looking to have two pounds of chopped beef delivered to their vehicle.

However, in the aggregate, these items showcase what Amazon is truly about: convenience. And that convenience is changing consumer perceptions on what can be expected from retailers generally, and in some ways, the food industry specifically. If a consumer wants to stop by and grab food on the way home, they can stop at a Whole Foods Market location. If they want items delivered to their home, Amazon Key allows the products to be stocked in the fridge. If they forgot to add paper towels to their order, they can hit a Dash button. If they are too tired to lift their finger, they can ask Alexa to do it. And now, they can even have their groceries delivered to their car if they so wish.

A robot and car delivery may seem to be a peripheral concern to food industry operators, but the Amazon Effect is rarely that cut and dry. Rather, the two technological developments are part of a broader effort by the company, which is redefining what omnichannel and convenience means to the consumer. Retailers would be wise to develop their own omnichannel offerings to keep pace.

Starbucks is speeding up plans to build stores with drive-thrus and will close locations in unpopulated malls, reported