Feb 13, 2019
Amazon, DoorDash and Instacart Could Be Just the ‘Tip' of the Iceberg
By Chris Campbell 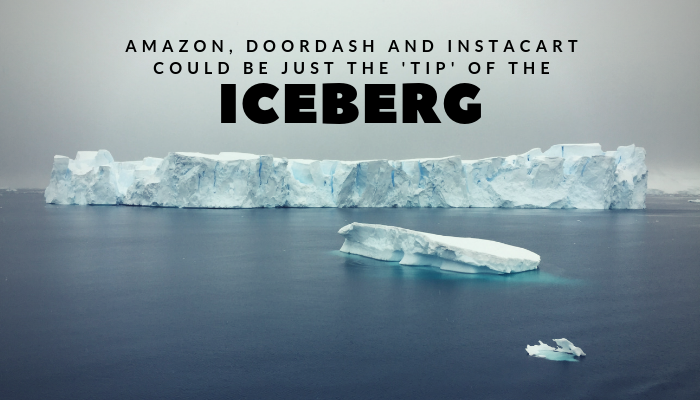 First, there was Fight for $15. Then, diners demanded that wait staff be paid a fair wage. Now, their delivery counterparts are fighting for similar protections.

From mom-and-pop shops to international restaurants to regional grocers, delivery is emerging as a differentiator for successful companies when compared to their competitors. However, more scrutiny is being applied to how those orders are delivered, especially when it comes to the tips and pay provided to a delivery driver.

Case in point: A class action lawsuit was filed against DoorDash alleging breach of contract due to the company allegedly taking tips that were intended for delivery drivers unlawfully. The suit accuses DoorDash of not remitting the full amount of gratuity a consumer leaves for its drivers and instead using the gratuity to cover its costs for the guaranteed base pay promised to drivers, according to Heninger Garrison Davis LLC, the law firm that filed the suit.

The law firm noted that DoorDash promises each driver a guaranteed base pay for each delivery job, plus 100% of the gratuity. However, Heninger Garrison Davis LLC alleges that DoorDash does not remit the full amount of gratuity that a consumer leaves for a Dasher.

DoorDash allegedly uses the gratuity to cover its costs for the guaranteed base pay promised to Dashers instead of paying the full gratuity in excess of the base pay. For example, "if DoorDash promised the Dasher $5 base pay for the delivery, and the customer tips the Dasher in an amount of $2, the Dasher still only gets $5," the law firm said.

Heninger Garrison Davis LLC went on to state that advertising from DoorDash does not fully explain this system. The law firm argued that company deceptively advertised the gratuity process, resulting in a violation of federal and state laws.

Instacart is in similar waters. The company faces a class action lawsuit over its handling of tips and treatment of drivers. The suit alleges Instacart uses tips to pay workers' wages, even though it advertises to customers that 100% of tips go directly to drivers, reported NBC News (Feb. 4).

The complaint, filed by Arns Law, alleges that Instacart "intentionally and maliciously misappropriated gratuities in order to pay plaintiff's wages even though Instacart maintained that 100% of customer tips went directly to shoppers. Based on this representation, Instacart knew customers would believe their tips were being given to shoppers in addition to wages, not to supplement wages entirely."

"Any consumer in the U.S. thinks that the money they are paying in a tip is 100% on top of anything else the service provider might be paid," said Carmen Balber, executive director of Consumer Watchdog, a nonprofit that advocates for consumers.

Almost immediately, Instacart decided to update its payment policy. The company will no longer decrease the amount it contributes to worker base pay based on the size of their tips and will reimburse workers who have been impacted by that practice, reported CNN (Feb. 6).

Even Amazon is being taken to task for these types of policies. The company reportedly uses tips earned by contracted delivery drivers to cover their promised pay, according to a review of emails and receipts. Amazon guarantees third-party drivers for its Flex program a minimum of $18 to $25 per hour, but the entirety of that payment doesn't always come from the company. If Amazon's contribution doesn't reach the guaranteed wage, the company makes up the difference with tips from customers, according to documentation shared by five drivers, reported The Los Angeles Times (Feb. 7).

“Our pay commitment to delivery partners has not changed since we launched the Amazon Flex program — delivery partners still earn $18-25 per hour, including 100% of tips — and on average drivers earn over $20/hour,” Amazon spokeswoman Amanda Ip wrote in a statement in support of the payment practice.

Let's face it: consumers are not going to eschew convenience, and delivery is here to stay. I would imagine delivery companies are furiously looking to their investments in drones and automated delivery technology to help stave off rising costs to meet consumer demand, but in the interim, delivery companies should take heed.

People want their goods delivered, but they also want the money they tip going straight to their delivery personnel.