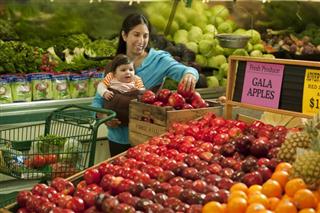 As we are approaching the mid-point of 2017, I think it is accurate to note that grocery retailers are in the midst of a sea change that will affect the way they conduct business going forward. From labeling rules to sugary beverage taxes to e-commerce dominance, grocery retailers are being forced to adapt to an evolving marketplace with increasing consumer demand for better-for-you products delivered directly to your door.

Don't believe me? Take a look at these articles Jennette and I have written for The Food Institute Blog in the past six months:

Beyond the shameless plugs of our previous work, I bring these articles up to illustrate a point: in an industry that is built around tight margins, tough competition and ever-changing demand, grocery retailers have had to contend with a number of new ideas and programs in 2017. However, the second half of 2017 will likely present the industry with its biggest challenge yet, as Lidl enters the market and Aldi makes its presence more known.

This week, Lidl will open the first of its U.S. stores. The stores, planned in North Carolina, South Carolina and Virginia, will represent its foray into the U.S. market, with plans to open as many as 100 stores along the East Coast by the close of 2017. Many of the products will be significantly cheaper than rivals' offerings, sometimes down 50%, reported Progressive Grocer (May 30).

Not to be undone, Aldi released expansion plans indicating the company would grow to 2,500 stores nationwide by the end of 2022 through a $3.4 billion investment, giving it the third largest grocery footprint in the U.S. by number of stores. The company is increasing its selection of organic produce, antibiotic-free meat and healthy options, with prices up to 50% lower than traditional grocery retailers.

Across the industry, people have wondered how this will affect the existing players in the U.S. grocery industry.

"Aldi and Lidl are very much 'an attack on the entire grocery sector' when looking at the precedent in Europe, with premium players likely more shielded," according to ResearchFarm analyst Daniel Lucht in a conference call with Deutsche Bank. Recently, Lucht observed a premiumization strategy from both players "in an effort to shift quality perception upwards, for example through Lidl's Deluxe brand or by adding national brands in weaker categories such as baby food or HBA."

Aldi and Lidl could capture 5% to 7% of the U.S. food market if both retailers' expansion plans are successful, according to McMillanDoolittle. The grocers' impact could go beyond market share, potentially starting price wars with competitors that try to mitigate the expansion plans, reported Forbes (June 12).

“Incumbent grocers need to take notice. The threat from Lidl is real and will only get clearer as their stores generate trial and repeat sales,” said George Faigen, partner in the Retail and Consumer Goods practice of Oliver Wyman. “Grocers who believe 'my customers would not shop at Lidl or Aldi' will likely be surprised. The US and European trends we have measured over the past five years tell a clear story of consumers moving portions of their weekly shopping from incumbent grocers to these private brand retailers.”

These three examples highlight the attention these two German-based discount grocery retailers are attracting, and I think it should be a concern of everyone in the industry, from big-box retailers to club warehouse formats to smaller, regional chains. Some argue that the likes of Walmart and Kroger Co. could fight off their lower pricing due to their scale, and some could argue that smaller, regional chains will be able to leverage their homegrown popularity with customers to ensure they don't lose them. Trader Joe's and Whole Foods Market could rely upon their "better-for-you" standing with some customers, and warehouse formats will likely be able to keep a share of the grocery bill by also offering other products that make it more convenient for shoppers to visit one store. However, it really does seem like the sea change is coming with the arrival of Lidl.

Clearly, there is a lot left that remains to be seen with the two chains. Aldi has already made an in-road into the U.S. market, and it seems likely Lidl will follow suit. How will the industry react? Be sure to stay tuned to The Food Institute Blog for the second half of 2017 to see how it unfolds.