Jul 26, 2018
UNFI Acquires Supervalu for About $2.9 Billion
By Chris Campbell 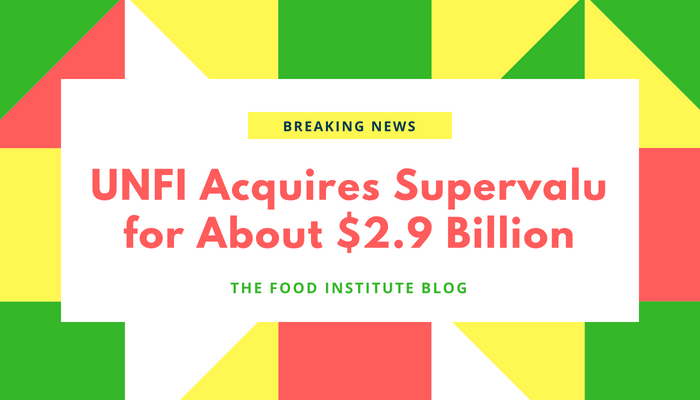 "This transaction accelerates UNFI's "Build out the Store" growth strategy by immediately enhancing our product range, equipping us to bring an attractive, comprehensive product portfolio to an expanded universe of customers," said Steve Spinner, UNFI's CEO and Chairman in a press release.

"We're not going to be in the retail business, it's just not what we do," he said.

Supervalu had already been shopping its grocery banners that include Shop 'N Save, Cub Foods, Hornbacher's and Shoppers. Supervalu, which has faced pressure from shareholder Blackwells Capital LLC to split its retail and wholesale units, announced in June that it plan to reorganize the company by separating its wholesale and retail operations.

A timeline on when UNFI would like to be completely out of the retail business was not provided. Mike Zechmeister, UNFI CFO, said the company would work on developing a plan and share details of that plan in due course.

Analysts and industry experts have said a buyer could be hard to come by as Schnucks and Dierbergs, the two most obvious potential buyers, have stores near most Shop ’n Save locations, and large grocers like Kroger seem hesitant to break into the market.

UNFI cited benefits of the deal include its ability to deliver comprehensive and expanded offerings, including the addition of high-growth perimeter categories such as meat and produce to UNFI's natural and organic products and expands market reach and scale, the ability to leverage scalable systems to streamline its processes.

Through this combination, UNFI expects to realize run rate cost synergies of more than $175 million by year three.

The transaction has been approved by the boards of directors of both companies and is subject to antitrust approvals, Supervalu shareholder approval and other customary closing conditions. The deal is expected to close later this year.