Not a Member? For as little as $99 you could have access to all webinar recordings – Learn more.

Blockchain For the Food Industry 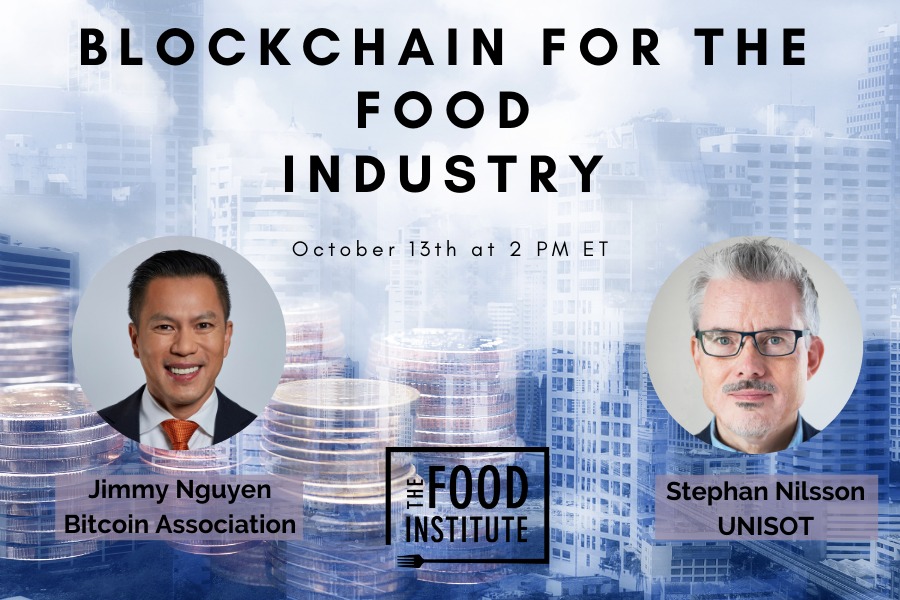 What is blockchain technology? How is it applicable to the food and beverage industry? Join Food Institute’s webinar on Tues., Oct. 13 as we delve into one of the more noteworthy technological innovations of our time: enterprise blockchain. Two of the most experienced educators and practitioners of blockchain—Jimmy Nguyen, founding president of the Bitcoin Association, and Stephan Nilsson, CEO of Unisot and SeafoodChain—will help you understand the basics of enterprise blockchain technology, and how food and beverage companies can successfully apply blockchain to make their operations more efficient and effective. You don’t want to miss this!

Stephan Nilsson
Co-founder and CEO
Stephan Nilsson is the co-founder and CEO of UNISOT; an “Enterprise Blockchain Service provider” offering Enterprise Turnkey Solutions that solves the top 10 problems in Global Supply Chains. He has over 20 years’ experience working with ERP system integrations. He is also the co-founder of SeafoodChain; an Industry Solution for the Seafood industry based on the UNISOT Enterprise Blockchain platform.

Jimmy Nguyen is Founding President of Bitcoin Association, the Switzerland-based global industry organization that works to advance business on the Bitcoin SV blockchain. Jimmy leads the Association as it supports massive scaling for Bitcoin SV (Satoshi Vision) to serve as the world’s blockchain for enterprise applications, and for BSV to be the world’s digital currency. With his legal background, Jimmy also guides the Association’s efforts to build a regulation-friendly ecosystem that fosters lawful conduct while facilitating innovation with Bitcoin technology.

Previously, Jimmy was CEO of nChain Group, the worldwide leader in advisory, research and development of blockchain technologies. nChain has one of the world’s largest blockchain patent portfolios, and is a key development and technology partner for Bitcoin SV.

Before joining the Bitcoin and blockchain world, Jimmy was an intellectual property and digital technology lawyer for 21 years. Over the course of his legal career, Jimmy was a partner at three major U.S. law firms – most recently Davis Wright Tremaine LLP, where he represented multinational corporations and emerging companies in a wide range of sectors. In 2008, Lawdragon named Jimmy (at only age 36) one of the “500 Leading Lawyers in America” and described him as a “dynamo talent.” A leader in the IP community, Jimmy was formerly Chair of the State Bar of California’s Intellectual Property Law section. He has been honored as the Century City Bar Association’s IP Lawyer of the Year (2011), and with the Association of Media & Entertainment Counsel’s Industry Leader Award (2017).

Jimmy is also a strong diversity and equal rights advocate. He co-chaired the California Minority Counsel Program and was inducted into its “Diversity Leader Hall of Fame” (2015). Diversity MBA Magazine named him a “Top 100 Under 50 Diverse Executive Leader” (2015).

Scroll To Top The Food Institute